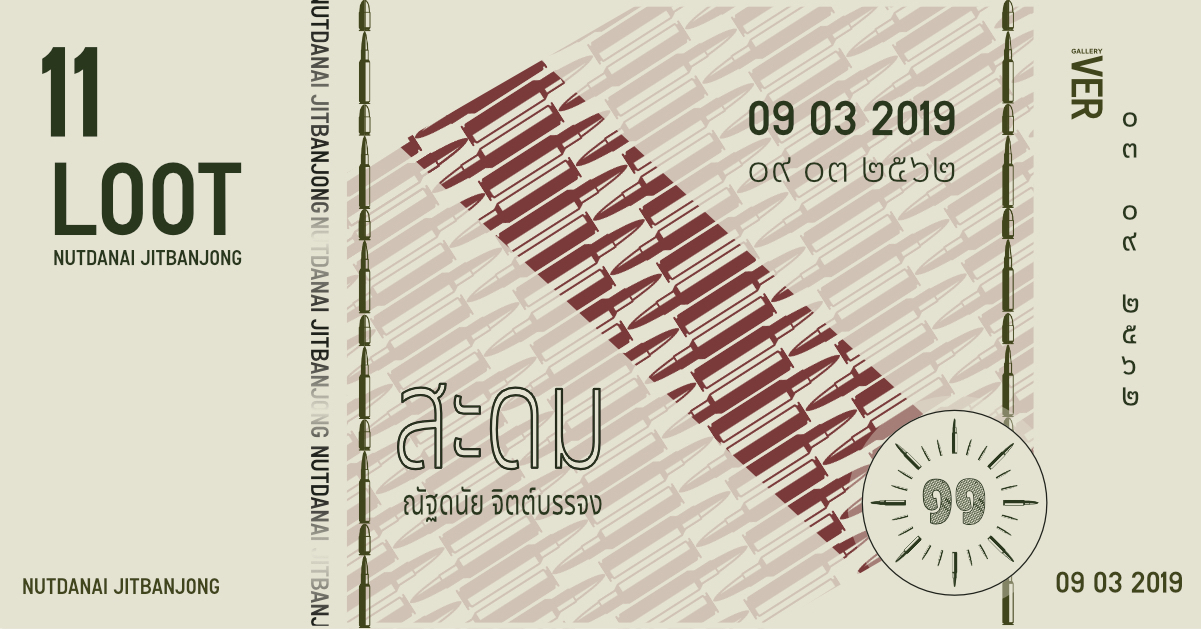 (For English please scroll down)

Loot began with an assembly of body of thoughts in modern colonial context, mainly during the period of wars in Vietnam, Laos, Cambodia, as well as Thailand. Nutdanai recognised an enormous amount of expense spent on warfare equipment to strengthen military power, at the same time, establishing Association of Southeast Asian Nations (ASEAN) of 11 countries (Thailand, Singapore, Philippines, Indonesia, Malaysia, Myanmar, Lao, Vietnam, Cambodia, Brunei, and Timor Leste). It is apparent that military force development is top on the list of each countries. This leads to working with symbolism in weapon, which are bullet from 11 countries.

Bullets symbolise violence, murder, threat, and destruction, that this artistice practitioner traded with his practice. The process of creating these bullets is no difference than how the state needs an immense amount of money bought from its power. However, in this artistic operation, it is a physical charm in the object that he has molded, polished, and varnished into artistic bullets which conceals metaphor of anesthetic from weaponry of power.

About artist
Natdanai is a new gen artistic practitioner who is interested in power structure of social and politic through objects and the role of historical dimension. His past works, such as Coup d’Etat series in Brandnew Project (2017), Heirs series in Early Years Project (2018), and A Massacre (2018) in Khonkaen Manifesto 2018, all point to his process which based on artistic research. The practitioner is the one who puts labor in unearthing informations, stories, intels, that are vital elements that lead to base knowledge in assembling his work, in order to present them in the exhibition space. More importantly, putting labor into fabricating his work is a process of transforming information and idea into material and object, as well as art establishment. Such force and dynamic shall never come fruitful unless the creator does not consider the role of an art practitioner, as well as the series Loot.