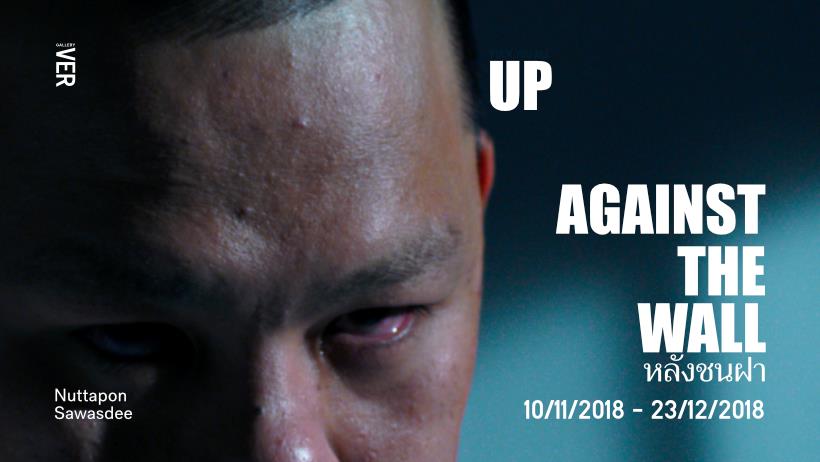 Up Against The Wall
by Nuttapon Sawasdee

Up against the wall by Nuttapon Sawasdee is a 1 Hr 14 minutes long re-production video of a scene from a widely known film the “Full Metal Jacket” by Stanley Kubrick in which the artist plays as Private Pyle in a one-minute scene in the film. The video is shot in slow motion which extends the one minute scene to an hour long. The sound is remixed by the artist. Nuttapon contemplate the situation in this scene as something that is not so different from what have been happening in the real world. Whether it is the society under dictatorship, within the art scene, or ranks in any class system, possibly, people like Private Pyle will continue to exist.

About Artist
Nuttapon Sawasdee (b.1989 Bangkok; lives and works in Bangkok) often expands the idea common everyday scenes such as cigarette packs, public space, or monuments, and bring the ignored aspects out to be noticed by the open eyes. His early works comprise mostly of political and social issues. However, he has undergone a major transition that shifts his work more towards personal and subjective values, while still retaining the influence of social issue. Nuttapon’s later work pulls the viewer to experience beyond visual, but to experience with sense, recognition, communication, and mainly sound.

Sound and music play a major role in shaping Nuttapon’s work. His works has been exhibited both in Thailand and foreign countries, e.g., TO WHOM IT MAY CONCERN , Bangkok city city Gallery, (Bangkok), Mutual Unknown Exhibition, National gallery of Indonesia (Jakarta), and Mode of Liaisons, Bangkok Art & Culture Centre (Bangkok). His latest work was exhibited as part of a group exhibition ‘Absurdity in Paradise’ at Fridericianum (Kassel). Nuttapon has won two awards in 2013 from Youngthai artist award(first prize) and Brandnew art project.

Where Do We Go From Here?