The Longest Way Round is the Shortest Way Home 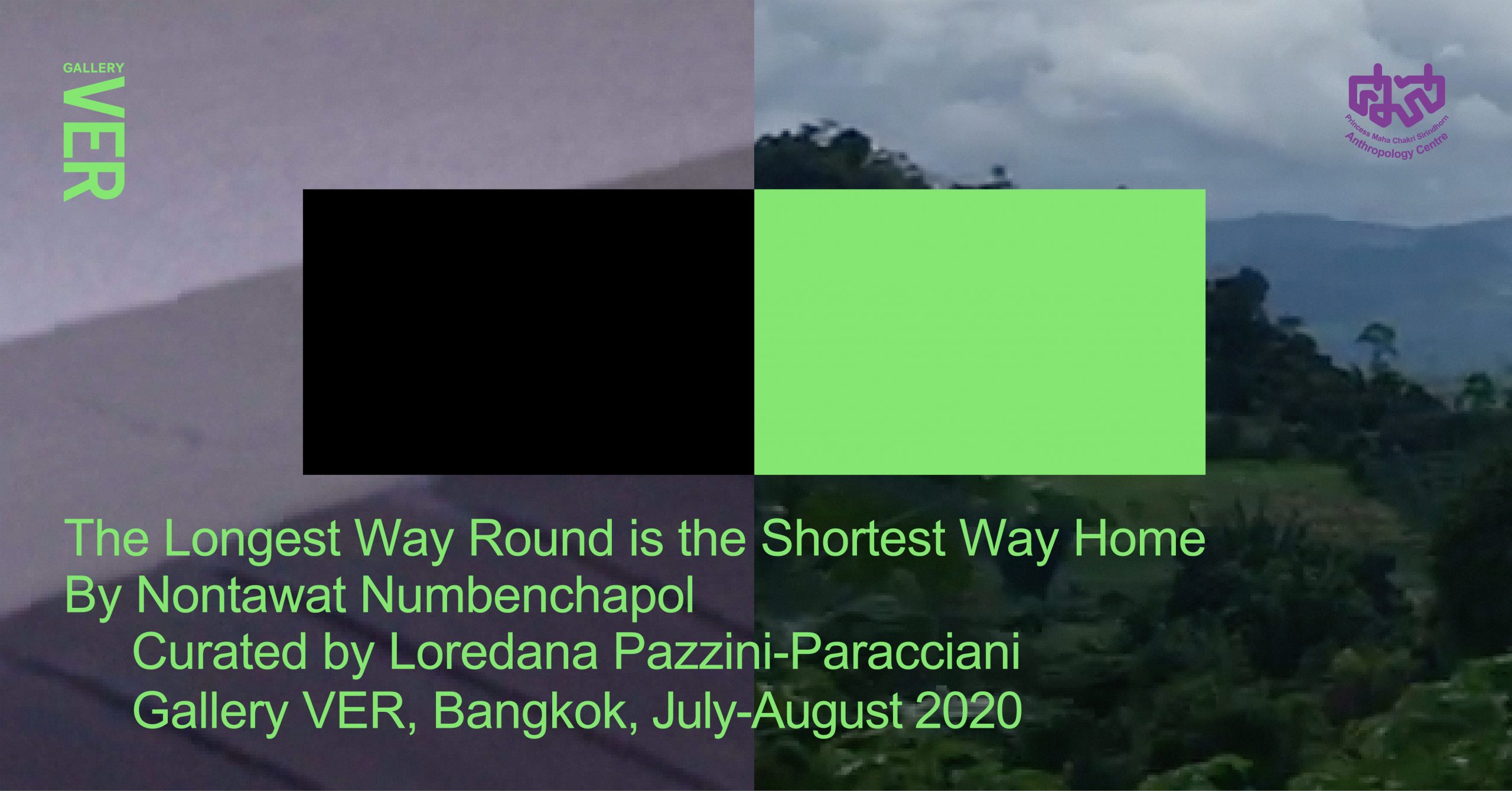 The Longest Way Round is the Shortest Way Home is Thai film director Nontawat Numbenchapol’s debut exhibition at Gallery VER, and his first-ever large-scale installation in an on-site gallery.

Focusing on Shan laborers in Chiang Mai, the ethnographical framework of ‘The Longest Way Round is the Shortest Way Home’ incorporates Numbenchapol’s observations and on-site research by way of unique footage shot in the inlands of Myanmar to trace the journey of a young man as he returns, after six years, to his village in the Shan State to visit his family and to process his much-needed national identity documents.

Filmed alone without accompanying crew, Numbenchapol’s footage serves as a collection of visual field notes that reveal the protagonist’s views on his migratory life, the pain of leaving behind his homeland, and his expectations while embracing a new life across the border. At the same time, the footage fuels larger questions of belonging and unbelonging to one’s own homeland and on the meaning of identity, social or otherwise, in the making of an individual.

Encompassing immersive video and sound installations, as well as photography and mixed-media works, ‘The Longest Way Round is the Shortest Way Home’ aims to facilitate dialogues on contentions of inclusion, exclusion and societal acceptance across Southeast Asian borders, while also establishing the foundation for Numbenchapol’s ground research on Shan laborers in Chiang Mai for a feature-length film on the same topic.

About Artist
Nontawat Numbenchapol works in fiction and documentary films. In 2013, he released his first documentary, Boundary, about the people at the Thai-Cambodia border. The film premiered at Berlin International Film Festival, Germany. In the same year Numbenchapol completed his second documentary, By the River, about the Klity villagers affected by water lead contamination. By the River was the first Thai film to receive the Special Mention award from the Locarno Film Festival. In 2016 Numbenchapol created an hybrid docu-fiction #BKKY, which was premiered at Busan International Film Festival and received the Jury Award for best feature- length film from Lesbisch Schwule Filmtage Hamburg, Germany. Since 2016 Numbenchapol has been working at the border between Thailand and Myanmar investigating the life of the youngsters in the military camps of the Shan State Army. Based on that experience he produced Soil without Land which has been screened at major film festivals including Vision du reel, Nyon, Switzerland and DMZ DOCS, Seoul, South Korea. His current research is focused on displaced ethnic minorities from Myanmar to Chiang Mai.

About Curator
Loredana Pazzini-Paracciani is an independent curator, writer and lecturer of Southeast Asian contemporary art. Her research and curatorial practice revolve around critical sociopolitical issues in Southeast Asia, advocating a counter-hegemonic and non-Western-centric discourse. She curated Diaspora: Exit, Exile, Exodus of Southeast Asia (2019) at MAIIAM Contemporary Art Museum and Architectural Landscapes: SEA in the Forefront (2015) at Queens Museum, along with several exhibitions for commercial galleries in the US, UK and Southeast Asia. She has published in Frames Cinema Journal, University of St Andrews, UK; Convocarte: Revista de Ciências da Arte, Lisbon University, Portugal; and M.A.tter Unbound, LASALLE College of the Arts, Singapore, among others. She is a member of the Association for Southeast Asian Studies in UK, and Research Network for Transcultural Practices in the Arts and Humanities, Berlin University. Together with Patrick D. Flores, Loredana co-edited the anthology Interlaced Journeys: Diaspora and the Contemporary in Southeast Asian Art, published in 2020 by Osage Art Foundation, Hong Kong.